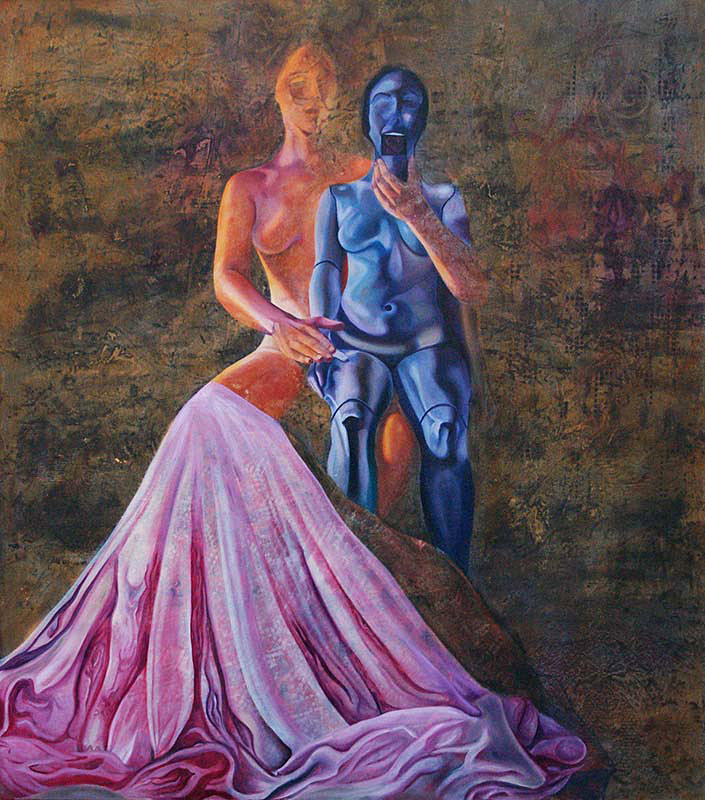 The start to the new year was laced with so many deadlines and responsibilities, none of which related to my art practice, so unfortunately, I don’t have any new work to show. I thought I would show some old work that have almost become icons of my message, which has stayed relatively unchanged but has grown since my final year at University in 2008. I made ten paintings that year, I will show you four, two of which I own and two of which are in very happy homes:)

When I look back on these works I see how anger, confusion and depression were transmuted into something positive and the effort was made to try and make sense of it all, through imagery. I wasn’t afraid to offend- in fact, I wanted to. I became a passionate (and very angry) feminist through contact with various writings and art from a range of writers and artists exploring femininity in art. I just had to express my thoughts and emotions into something concrete- I chose painting.

I was very much influenced by one of our lecturers who had given us presentations on the ‘self’ in art, with artists like Anna Mendieta and Cindy Sherman being used as examples. It was only then that I realised that this is what I was doing through my work. I was trying to find the ‘self’ in my self, in my art or through my art. I was trying to give the figures in my paintings a fixed presence that I felt was lacking in my own being.

At the same time as wanting to give the figures in my paintings a presence I wanted to show how this presence gets undermined by the act of self-objectification, or turning yourself, your body into an object.

This is a rather strange phenomenon which can happen to both men and women (although its more common in women) in which you often see yourself from a third person perspective, like you are watching a movie of yourself. You may loose a sense of ‘hereness’ and ‘nowness’ and feel disconnected somehow from your body.

Along with these desires to show a presence in the female body I also wanted to confront the idea of the ‘gaze’, specifically the ‘male gaze’. I felt at the time that this so called ‘male gaze’ was responsible for this self objectification and lack of presence in paintings/photographs of nude women created by artists.

I wanted to create a new nude, one that was strong; physically, spiritually and psychologically. One that could not be turned into an object of desire, even if she was naked. One that turned away from the viewer, stared out at the viewer or repelled the viewer with strangeness of form or colour or both.

It’s no secret that I use my own body as the subject of many of my paintings, which could, in a way, be considered as a form of self objectification, which is ironic on a few levels:) Because of this, I want there to be a humorous, if not cynical exploration of what it means to be a woman or indeed a human being in this world, in this body and in these times.

I think many people are feeling a displacement of being, dare I say a looming sense of doom?? Okay lets not get pessimistic. I believe there are some wonderful developments in our world too. Someone remind me what they are please?

I think people, like me, are searching for something, they do not know what it is. I hope that it is a sense of self they are seeking and a sense of peace, which I think all human beings search for without necessarily knowing it.

Get my monthly art newsletter in your mail box where I talk about news, upcoming shows and my life as an artist